In the area of topology, there has been a lot of exciting progress in recent years. Topological tools and ideas have been used in arithmetic geometry, for instance, topological cyclic homology, and in low dimensional topology, like constructions of new knot and link invariants using homotopy theory and so on. On the other hand, topology has found exciting applications in science and technology. In mathematical physics, topics like topological quantum field theory, quantum anomaly cancellation, topological T-duality, topological insulators, topological order, and others, have made tremendous progress. In modern technology, topology has also played prominent roles. In particular, TDA (topological data analysis) has demonstrated great potential for big data and has been widely used in the study of robotics, materials, chemistry, biology, drug design and discovery. More and more topological tools and ideas have been used in machine learning and deep learning models. The aim of the seminar is to invite top experts and young researchers to introduce and share their progress in the study of topology and its applications. We expect that the seminar will bring potential collaborations and broaden the horizon of young students.

hybrid (face to face and online). The seminar will be held on every other Thursday from March 10, 2022.

We consider on arbitrary Riemannian manifolds the Leibenson equation:
$$\partial _{t}u=\Delta _{p}u^{q}.$$
This equation comes from hydrodynamics where it describes filtration of a turbulent compressible liquid in porous medium.  Here $u(x,t)$ is the fraction of the volume that the liquid takes in porous medium at time $t$ at point $x$. The parameter $p$ characterizes the turbulence of a flow, while $q$ describes the compressibility of the liquid.
We prove that if $p>2$ and $1/(p-1)<q\leq 1$ then solutions of this equation have finite propagation speed. On complete manifolds with non-negative Ricci curvature, we obtain a sharp propagation rate that matches that of Barenblatt solution.

Professor Alexander Grigor'yan received his PhD from Lomonosov Moscow University in 1982. Since then, he worked at the State University of Volgograd and the Institute of Control Sciences in Moscow with receiving his habilitation in 1989. He has been a Humboldt Fellow at Bielefeld University in 1992-93 and a Guest Scholar at Harvard University in 1993/94. After working from lecturer to professor at Imperial College London in 1994-2005, he became a professor at Bielefeld University from 2005.
Professor Grigor'yan won a gold medal at International Mathematical Olympiad when he was 17, awarded by the Prize of the Moscow Mathematical Society in 1988, and received the Whitehead Prize of London Mathematical Society in 1997. He was an invited speaker of European Congress of Mathematicians in Barcelona in 2000.
Professor Grigor'yan is one of the top experts in geometric analysis on Riemannian manifolds, metric spaces and graphs, with making various important contributions on the topics.

The depth of a cell in an arrangement of $n$ (non-vertical) great-spheres in $S^d$ is the number of great-spheres that pass above the cell.  We prove Euler-type relations, which imply extensions of the classic Dehn--Sommerville relations for convex polytopes to sublevel sets of the depth function, and we use the relations to extend the expressions for the number of faces of neighborly polytopes to the number of cells of levels in neighborly arrangements.
This is work with Ranita Biswas, Sebastiano Cultrera, and Morteza Saghafian.

Herbert Edelsbrunner is one of pioneers for topological and geometric approaches to data science,  by his excellent research on the topic during the decades, from his PhD thesis on computational geometry in 1982 and assistant professorship in Information Processing at the Graz University of Technology during 1981-1985, to his professorship positions at UIUC, Duke and ISTA.  Professor Edelsbrunner received Alan T. Waterman Award, he is members of the Academia Europaea, the American Academy of Arts and Sciences and the German Academy of Sciences Leopoldina. Professor Edelsbrunner is widely recognized as one of founding fathers of the new-born area of topological data analysis (TDA).

I will introduce a novel 5 step procedure that given time series data generated by a stationary deterministic nonlinear dynamical system provides a lower bound on the probability that the system generates specific local and/or global dynamic behavior. More precisely, the time series data is used to define a Gaussian process (GP). The mean of this GP provides a surrogate model. The dynamics of the surrogate model is interrogated using combinatorial methods and characterized using algebraic topological invariants (Conley index). The GP predictive distribution provides a lower bound on the probability that these topological invariants (and hence the characterized dynamics) apply to the unknown dynamical system (a random path of the GP).  The focus of this talk is on explaining the ideas, thus I restrict our examples to one-dimensional systems and show how to capture the existence of fixed points, periodic orbits, connecting orbits, chaotic dynamics, and bistability.
This is based on joint work with B. Batko, M. Gameiro, Y. Hung, W. Kalies, E. Vieira, and C. Thieme.

Prof. Konstantin Mischaikow received his Phd from University of Wisconsin-Madison in 1985. He has worked as assistant professor and associated professor at Michigan State University and Georgia Tech. He is the director of CDSNS at Georgia Tech for eight years. Currently, he is the distinguished professor at Rutgers University. Prof. Konstantin Mischaikow is a world-leading expert in computational homology, Conley index, and their applications in dynamic systems. He has published more than 300 papers with a total citation > 9000. 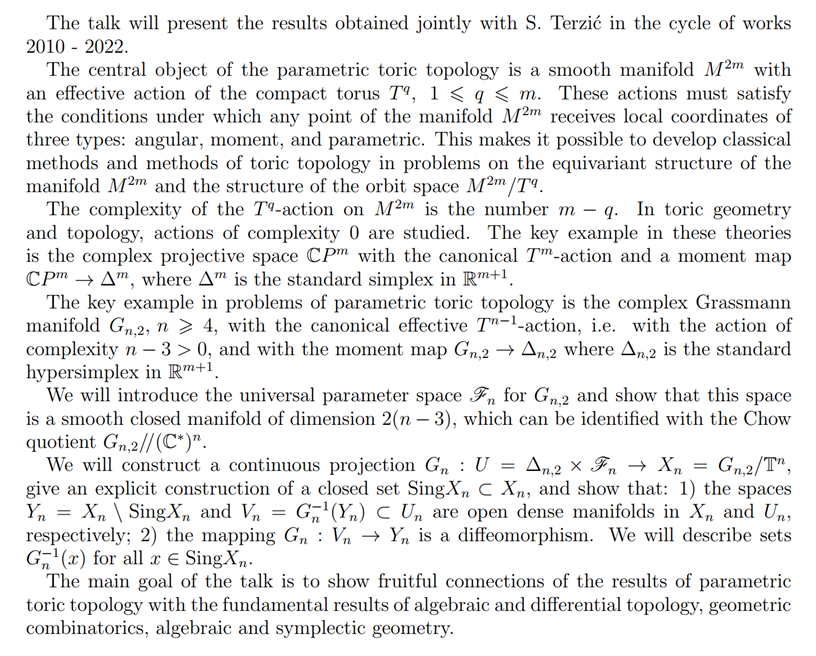 Prof Victor Matveevich Buchstaber is a famous expert in algebraic topology, homotopy theory, and mathematical physics. He received his PhD in 1970 under the supervision of Sergei Novikov and Dr. Sci. in Physical and Mathematical Sciences in 1984 from Moscow State University. In 1974 he was an invited speaker in the International Congress of Mathematicians in Vancouver (Canada). He became a corresponding member of the Russian Academy of Sciences In 2006 . Now he is a principle researcher in the Department of Geometry and Topology of the Steklov Mathematical Institute. Prof Buchstaber is a leading expert of the new-born area of toric topology.

Machine learning using neural networks is a very powerful methodology which has demonstrated utility in many different situations. In this talk I will show how work in the mathematical discipline called topological data analysis can be used to (1) lessen the amount of data needed in order to be able to learn and (2) make the computations more transparent. We will work primarily with image and video data.

Gunnar Carlsson received his Ph.D. from Stanford University in 1973, and has taught at University of Chicago, University of California (San Diego), Princeton University, and since 1991 at Stanford University.  His early work was in algebraic topology and homotopy theory, and includes proofs of Segal's Burnside ring conjecture, Sullivan's fixed point conjecture, and many cases of the Novikov's higher signature conjecture.  Since the late 1990's, he has also worked on topological approaches to data analysis, machine learning, and deep learning.  He was a founder of the data analytics company Ayasdi Inc., and is a founder of the Deep Learning startup BlueLightAI INc. 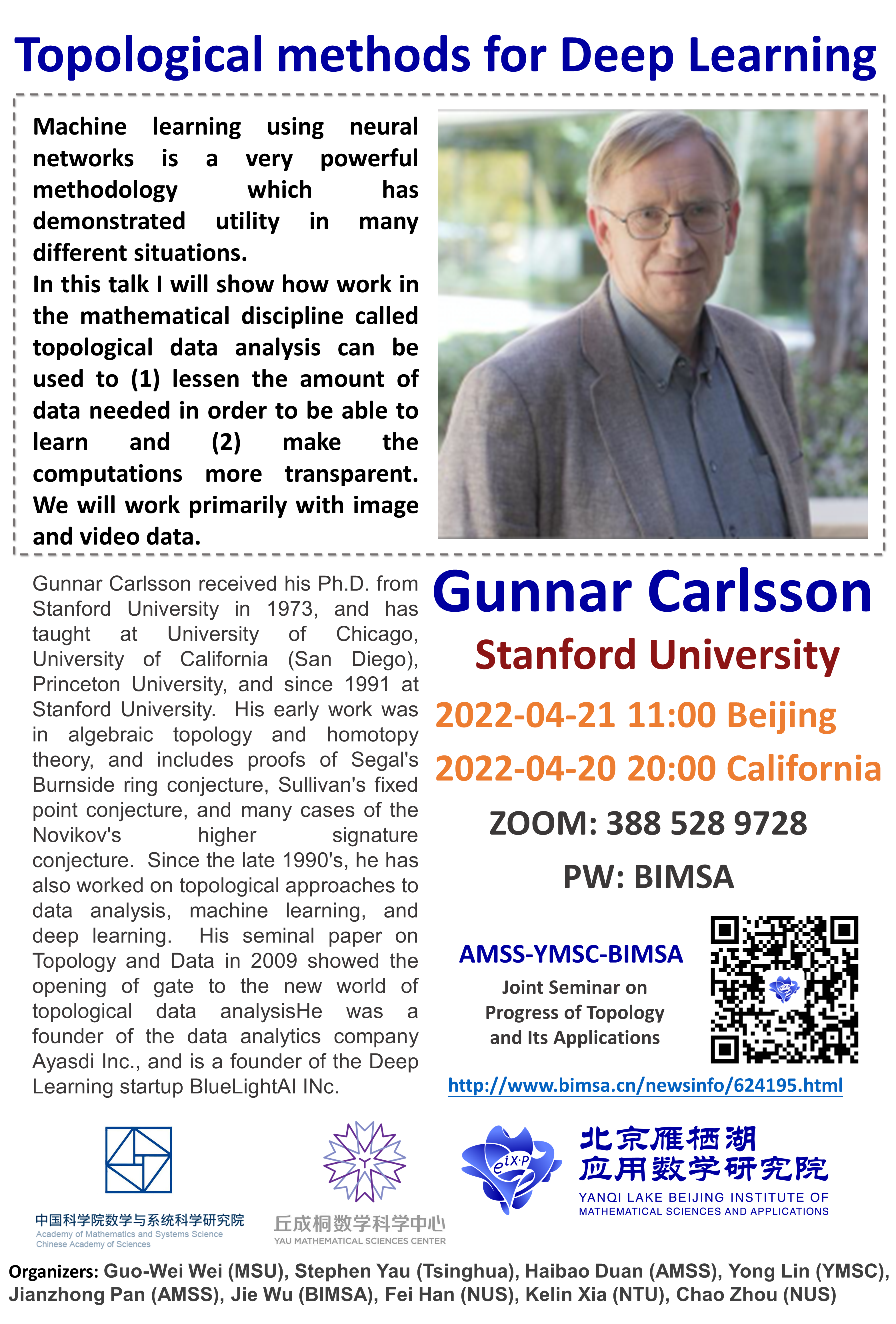 How Math and AI are revolutionizing biosciences

Mathematics underpins fundamental theories in physics such as quantum mechanics, general relativity, and quantum field theory. Nonetheless, its success in modern biology, namely cellular biology, molecular biology, biochemistry, genomics, and genetics, has been quite limited. Artificial intelligence (AI) has fundamentally changed the landscape of science, technology, industry, and social media in the past few years and holds a great future for discovering the rules of life. However, AI-based biological discovery encounters challenges arising from the structural complexity of macromolecules, the high dimensionality of biological variability, the multiscale entanglement of molecules, cells, tissues, organs, and organisms, the nonlinearity of genotype, phenotype, and environment coupling, and the excessiveness of genomic, transcriptomic, proteomic, and metabolomic data. We tackle these challenges mathematically. Our work focuses on reducing the complexity, dimensionality, entanglement, and nonlinearity of biological data. We have introduced evolutionary de Rham-Hodge, persistent cohomology, persistent Laplacian, and persistent sheaf theories to model complex, heterogeneous, multiscale biological systems and thus significantly enhance AI's ability to handle biological data. Using our mathematical AI approaches, my team has been the top winner in D3R Grand Challenges, a worldwide annual competition series in computer-aided drug design and discovery for years. By further integrating with millions of genomes isolated from patients, we reveal the mechanisms of SARS-CoV-2 evolution and transmission and accurately forecast emerging SARS-CoV-2 variants. Geometry and Topology of Data

Data sets are often equipped with distances between data points, and thereby constitute a discrete metric space. We develop general notions of curvature that capture local and global properties of such spaces and relate them to topological concepts such as hyperconvexity. This also leads to a new interpretation of TDA.